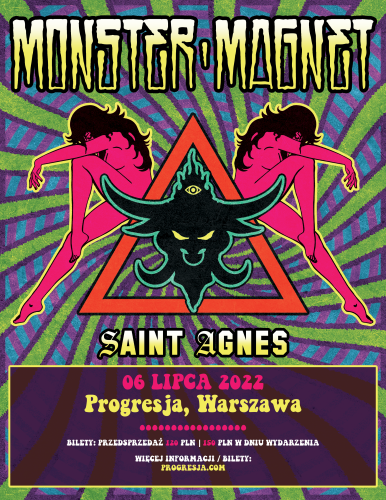 Monster Magnet at the only concert in Poland! The legendary group will present songs from their first cover album in the history! The album “A Better Dystopia” certainly surprises with a non-obvious selection of songs that, in addition, fit perfectly into the repertoire of Dave Wyndorf’s band. In addition to the most popular songs of the band, you will experience live inspirations that had a significant impact on the work of the stoner rock group from New Jersey. Get ready for Hawkwind, PooBah, Table Scraps, Dust and The Scientists covers performed by Monster Magnet! Find out what happened until recently with the band Monster Magnet and decided about the creation of their last full-length album “A Better Dystopia”.

Find out what happened until recently with the band Monster Magnet and decided about the creation of their last full-length album “A Better Dystopia”.

MONSTER MAGNET – A BETTER DYSTOPIA
Apocalypse now and then: MONSTER MAGNET in the great shutdown 2020-2021
When MONSTER MAGNET (Dave Wyndorf, Phil Caivano, Bob Pantella, Garrett Sweeney and Alec Morton) got off the plane in the USA after their POWERTRIP tour of Europe in February of 2020, they already realized that they’d dodged a big bullet. The band members were all healthy, despite having spent the last week of the month-long excursion gigging in Italy and Spain, and at that point, those countries were getting crushed by COVID and in total lockdown. Part two of that tour, North America, was scheduled to begin three weeks later… but we all know the rest of that story. NO LIVE MUSIC. Anywhere. So, what’s a band that’s been touring regularly for 30 years to do?
Frontman Dave Wyndorf takes it from here…
“We all agreed that we would be bored out of our minds within a month. MONSTER MAGNET loves the road. Playing for live audiences is what we live for. It’s a lifestyle.
So, as we considered the gloomy prospects of a world without live rock, I considered our options. Rather than panhandle on the internet, hawking masks and Zoom-rocking practice sessions for dollars, I suggested we record a “bunker record”. A total DIY affair (band only) recorded and mixed in Bob Pantella’s small but potent Freak Shop Studios/rehearsal space right here in New Jersey. But what to record? Space jams?
I didn’t have any new stuff, I didn’t feel much like writing, and the band was chomping at the bit. Working on anything was better than watching the news as hospitals filled up, people died, and American politics went bat-shit crazy. The world roared “Dystopia! Apocalypse! Revolution!”. I’d heard those words before, and they brought to mind my childhood in the late 60’s/early 70’s… and the music… and a list… a short playlist of songs (just one of many) that I’d been carrying around with me on my whatever device to listen to before shows. Of course, these tunes have also been in my head for more or less my whole life. These were not the popular hits of the time. This was like a playlist from the 4th dimension… strange bits of musical obscurity, mostly dredged up from that inglorious and freaky “twilight zone” time that preceded
Arena Rock, Heavy Metal, Reggae and Disco. A no-man’s land of hard rock that still had remnants of psychedelia and garage punk but had abandoned any notion of “flower power” or frat house fun. And of course, they rocked.
Yeah, these songs were it. I wanted to sing this stuff and the guys wanted to play it. We could make this a MONSTER MAGNET album. These tunes all had a vibe I could relate to in these strange times. And here’s why…
When I was a kid, the shadow of nuclear Armageddon, the war in Vietnam, the Manson murders, Altamont, the Kent State shootings, racial tensions, a steady stream of civil unrest and LSD selling at 50 cents a tab in public schools… these were just a few of the things that made the late 60’s and early 70’s a grownup’s paranoid nightmare. “Dystopia! Apocalypse! Revolution!” (There are those words again). But I was a young teenager in those days and yeah, the world was obviously crazy, but it was also filled with extremely colorful and imaginative possibilities if you knew how to dodge the really bad stuff. And all that MUSIC! In my excited brain, the plusses outweighed the minuses of the time. In my eyes, the world seemed painted in black light, and in that searing glow, it seemed the only limit was one’s imagination. Feeling weird? Scared? Paranoid, maybe? Then own it, man! Get it out there!
These songs do all that plus add a kind of 4th dimensional hallucinatory vibe that’s almost spiritual in nature. That vibe is almost lost in modern music and I, for one, would like to keep it alive in any way I can. One thing’s for sure, they don’t write ‘em like this anymore…
The great bands whose music we lovingly interpret here were (and some still are) on the fringe, underrated, and in our opinion, really, really cool. I think that’s reason enough for us to do this album. Furthermore, A Better Dystopia is a collection of songs that I think reflect (knowingly or unknowingly) a paranoid time in history, but also deflect that same paranoia by owning it, fully. And of course, it ROCKS.
Well, here we all are in 2021, and that playlist from the 4th dimension has become MONSTER MAGNET’s “bunker record” for our new weird times. I for one am happy about that.
The world’s still out of its collective mind, of course, and I have to say that if I were forced to choose between the two “end times” I’ve so far been offered
in my life, I’d certainly pick apocalypse then over apocalypse now. It was a much better dystopia. And it sounded cooler, ya know?”

By clicking "Continue", closing this message or staying on this website you agree to your data being processed by Progresja Music Zone Sp. z o.o. The data is processed only for analytical purposes. Continue